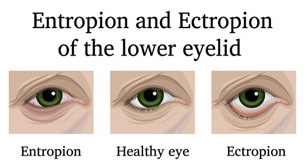 With age and time, the connective tissue of the eyelid can involute or develop some scarring, leading to several lid conditions. Entropion, or an inward turning of the eyelids and lashes, as shown on this image. Involutional entropion is due to a combination of causative factors: loss of horizontal lid support with canthal tendon laxity; disinsertion, atrophy or dehiscence of lower lid retractors; overriding of the preseptal over pretarsal orbicularis oculi; loss of vertical lid support with tarsal atrophy; and orbital fat atrophy leading to enophthalmos that allows inversion of the lid margin

Patients with entropion tend to present with complaints of foreign body sensation, redness, tearing and discharge. Symptoms may be intermittent depending on etiology. Dry eye syndrome is present in 72.1% patients, and punctate epithelial erosions are noted in 61.9%. In some patients, visual symptoms in down gaze, from absence of synkinetic lower eyelid margin movement may be the presenting feature.

A patient suspected to have entropion should undergo a thorough ophthalmologic exam. On gross exam, one should note any blepharo or facial spasm, signs of skin irritation or infection and ocular surface disturbance including cicatricial changes. The physician should pay close attention to the lid margin structures to evaluate for associated trichiasis, distichiasis and epiblepahron. These conditions can mimic entropion but do not have improper position of the eyelid margin and have different management.

One should examine the cornea with fluorescein for abrasions, corneal scarring or thinning, and neovascularization of the cornea. Careful examination of the conjunctiva is important, as partial lid entropion of the lateral or medial lid may not affect the cornea. The examiner should make note of symblepharon, finical shortening, and margin abnormalities if present, as these findings may indicate an inflammatory process.

What are the types of entropion?

There are four main categories of entropion, each with a different pathophysiology: involutional, spastic, cicatricial and congenital. Treatments are aimed specifically at the particular causes for the condition.

Involutional entropion is the most common type of entropion. Management should be directed at the specific mechanical failures of horizontal and vertical lid laxity, lower lid retractor weakness, and orbicularis oculi override. Addressing more contributing factors has a greater chance at achieving resolution.

Patients can achieve temporary relief with taping of the lower lid to the malar eminence[39] or with application of a cyanoacrylate liquid bandage to evert the lid margin. These treatments are beneficial as temporizing measures until the patient can have surgery for definitive repair, or if the patient is too ill to be a candidate for surgical intervention. Temporary relief from involutional entropion can also be achieved with botulinum toxin injections to the presential orbicularis, to combat override.Carbon dioxide laser skin resurfacing has been proposed as a conservative means of managing involutional entropion. This method was described with success in four of five patients followed for 21 months.

General principles of management include either addressing one of the factors alone or whenever possible addressing the 2 main causative factors: lower eyelid laxity and reattachment of lower eyelid retractors. In the elderly and debilitated patients, minimally invasive and brief procedures may be attempted first albeit with reduced success rates.

Treatment include lubrication to limit mechanical trauma, taping the lower lid to the malar prominence, or injecting low doses of botulinum toxin into the orbicularis to weaken the muscle and prevent override. Surgical therapy provides definitive treatment.